In the foothills of the Ore Mountains, near the Saxon border, around 1206 the Osek monastery was built. At the time of their arrival in Osek, the Cistercians had been behind the almost six-year period when the convent lived in Mašťov at the estate of the Milhoště, who originally invited the monks to Bohemia.

The noble family of Hrabišice took over the dominion in Osek. Under the protection of the new founding family, the Ossetian monastery began to prosper rapidly. One of his most famous periods became the 30th century of the 13th century. At that time monk Abbot Slavko, the grandson of the founder of the monastery in Osek, stood at the head of the monastery.

The Order of the Cistercians originated from the First European Order of Benedictines, the Reformation of Religious Rules, which at the end of the 11th century was made by Robert of Molesme and then by his follower, St. Bernard, in the Bourgogne Convention in Citeaux, the first Cistercian monastery in the world. 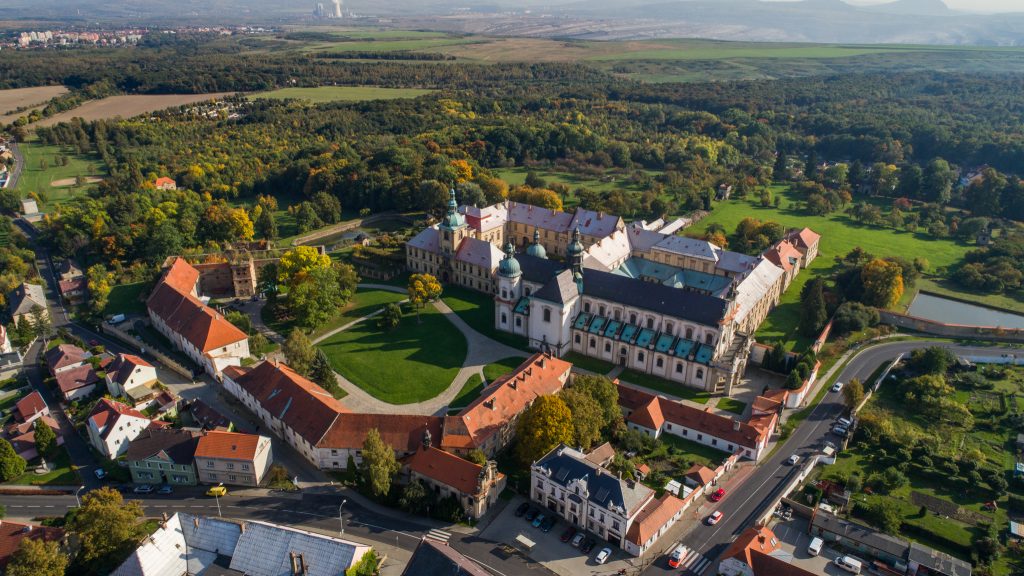 History of the monastery

Milhost ml. from Mašťov in 1191, asked Abbot Erkenbert from the Cistercian monastery in Valdsas about the sending of a group of monks who would establish a new monastery in Mašťov and help to cultivate the region.

The Cistercians came in the spring of next year. Immediately after arriving, Milhostem was generously endowed with 15 Czech villages, 2 courtyards, and a retirement from a market place. Not long after the gray monks settled, the first disputes began to appear. Milhost, who counted on the fact that his fortune had grown even more thanks to the Cistercians, did not want to completely abandon his influence over the donated territory, but the monks did not want to obey. For four years, Henry Břetislav, the Czech prince of the Přemyslid family, had to make a decision confirming the confirmation deed for the monastery in 1196. But then the disputes did not cease.

When the Osek Grand Duke Slavek of the Hrabishice family searched for a suitable convent, Milhost offered him his grandchildren. Thus, between 1196 and 1197, the Cistercians of Mašťov left and found a new monastery in Osek.

The Ossetian monastery experienced a stormy flowering at first. Then years of decay came. At the end of the 40s of the 13th century the monastery was attacked by the troops of Přemysl Otakar II, who wanted to prevent his father, Václav I, from gaining access to material and financial resources.

The dismantling of the property of the Osecká monastery continued until 1580, when it was at the instigation of Rudolf II. monastery canceled. The property fell to the Archbishop of Prague and the monks were forced to leave for Zbraslav.

The abolition of the monastery was canceled in 1614 by Pope Paul V. During the Thirty Years’ War (1618-1648), the Prosecutor’s estate was confiscated by the Prosecutors and sold to several buyers.

After the Battle of White Mountain in 1620, the decision to return the monastery back to the hands of the Archbishop took place and on 4th July 1623 a decree was issued which ordered the return of the monastery in Osek back to the Cistercians.

Baroque flourishing of the monastery

18th century – Baroque flourishing of the monastery, rebuilding the convent and the church. This was due to two of the most important abbots of the monastery – Abbot Laurencius Knittl called Scipio and Abbot Benedict Littwerig.

Laurencius abolished the restoration of the monastery, Litwerig continued in it, and in 1712 – 1718 he had the monastery reconstructed in the form it is today. This reconstruction was commissioned by Littwerig abbot Litoměřický stavitel of Italian origin Octavius ​​Broggi. 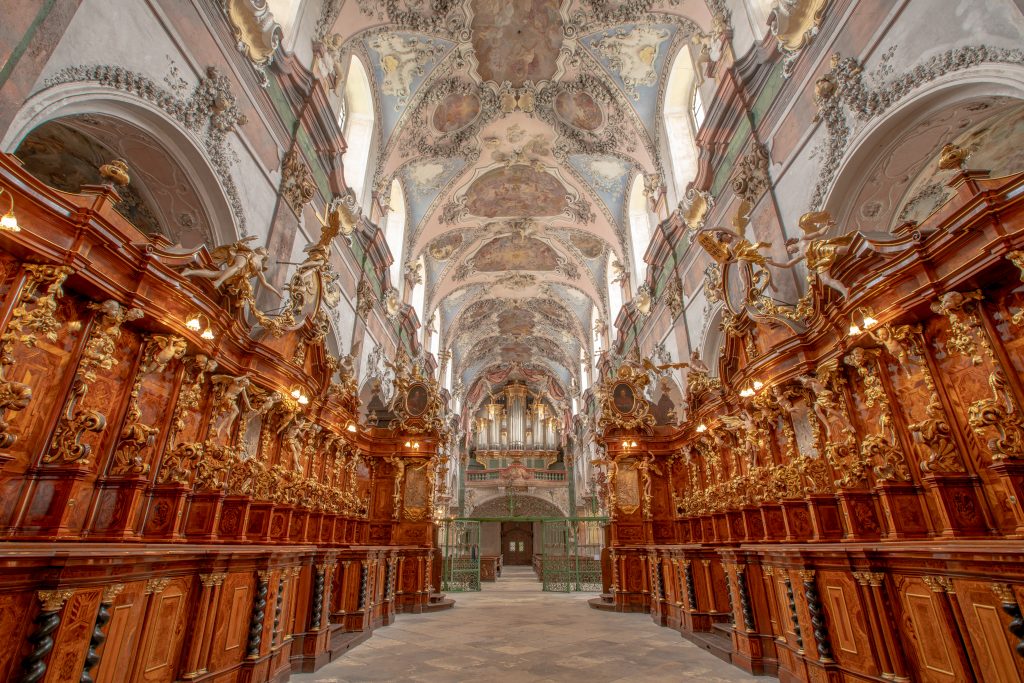 At the time of these two enlightened abbots, for example, a pharmacy, a hospital, a manufactory, and a monastery gardens in the style of French castle gardens were established.

The decline of the monastery in the 1950s

After 1945, the Cistercians had to leave the monastery, as in the past. They were made up of the Salesians who stayed there freely until 1950 when the whole complex took over the state and established an internment camp there first for 230 monks, priests and novices who were constantly taken to various prisons for forced labor eg in Příbram or Jáchymov, uranium mines. In 1954, a charity home was established for 300 religious sisters who came from six different religious orders. They remained in Osek monastery until 1993, when they could return to their maternity monasteries.

The Cistercians returned to Osek in 1989, but officially won the monastery back in 1991, when Abbot Bernard Thebes was elected.

Today, the monastery is financed by state subsidies, it also lives out of charity and serves as a cultural and tourist center that offers the opportunity to look into history in several stages – from Romanesque to Baroque.

In 1992, the 14th World Congress of the St. Benedict, patron of Europe. On that occasion the Circle of Friends of the Osek Monastery was established. Its members come from all over the world and have the sole task of helping the Osek monastery in any way, so that even the next generation can sit in the shadow of the monastery walls with a view of the human work that has lasted for ages. Since 1995 the monastery has been a National Cultural Monument.

The monastery belongs to the Congregation of the Most Merciful Heart of the Virgin Mary, headed by the Cistercian monastery of Sostrup in Denmark. Mother Superior Tereza is entrusted with the General Abbot of the Order to manage five monasteries, including the Osean Monastery. Abbess Bernhard spent his days in the house of seniors of the Nazarene nurses in Goppeln near Dresden where he was in the care of nurses of the order. On Saturday, March 27, 2010, he died in this hospice and, on 7 April, his remains were deposited in the monastery crypt. Brother P.M.Charbel was summoned to the Cistercian Priory of Bochum-Stipel in Germany on September 29, 2008 and is currently a monastery without a monastic convent. The Czech Circle of Friends of the Osek monastery takes care of the monastery. 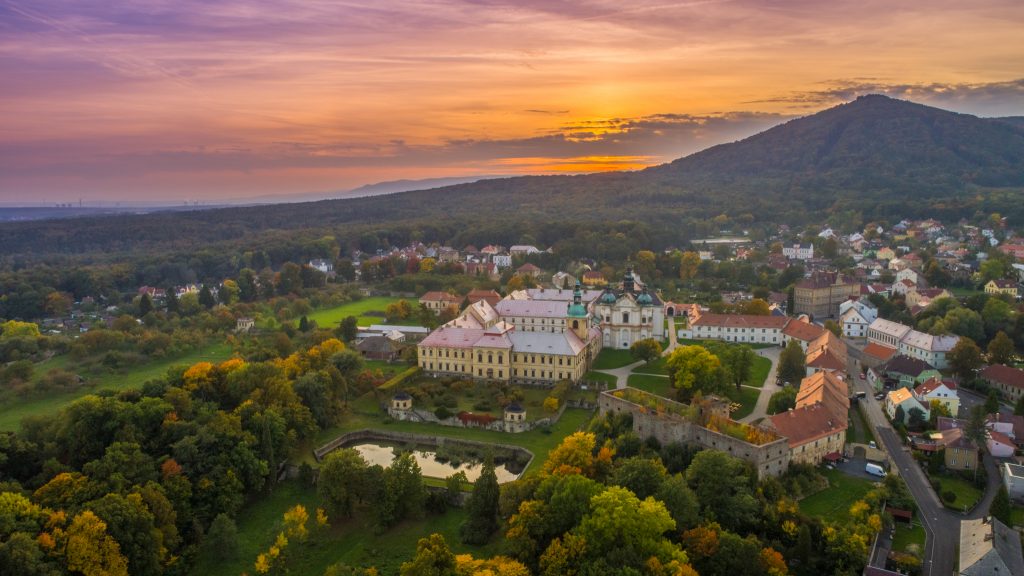